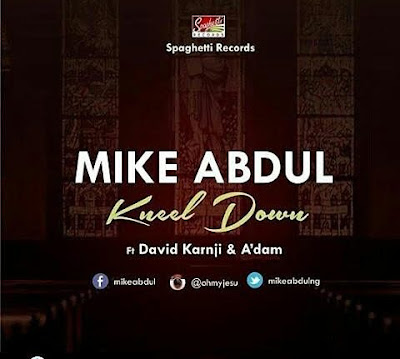 I have to say, Kneel Down is a type of song with the rhythm a lot of people are familiar with but never expected from Mike Abdul. Nevertheless, the Spaghetti Records boss has just proved to us again that his versatility cannot be encamped within a specific genre of music.
After listening to the song Kneel Down featuring David Karnji and A’dam several times and I’m still listening even as I write this post, I got deep in the groove and just feel the need to write a review of this song, and here is “My Opinion” about the song.
First, the production of this song is top-notch, if I am to rate it on the scale of 10, I’ll give it a 9. The song really shows that the three artistes are really having fun on the song, and each of them voiced their expression on the beat as they could with high energy and enthusiasm, but the producer was able to connect every piece of the song and make it a beautiful tune we all are can dance to….so thumbs up for Awesome mix
The song opens with a voice trying to speak in Chinese or in a special tongue, I guess what he’s trying to say is “You the children of Jesus, whenever you go through a challenge so tough and you don’t know the way out, that is time you need to Kneel Down and pray”
Okay, this is the major part of the song that will initiate most of the discussion anyone is trying to have on this song… Mike Abdul rapping, not just any rap but street rap. Mike’s part talks more about living as a proud son of God who is at liberty in Christ to do exploits and also emphasizing the victory one has in Jesus ‘giving devil uppercut’
David Karnji’s part is centered on Matthew 5:15-16 “No one lights a candle, and hides it under the table… so shine your light for the world could see…” I say this line encourages Christians to stand up for Christ and stand out in Christ.
DOWNLOAD ‘KNEEL DOWN’ BY MIKE ABDUL
A’dam comes in after David Karnji’s lines and he says:
“ L’aye mi ma d’eni olola,
L’aye mi ma d’eni oloro,
Ori mi ori apesin, ori blessing”
The words declare ‘I will be great, I’ll be wealthy and richly blessed’ and I think that’s a prayer no one will be reluctant to pray for one’s self.
By now you’ll be wondering why the verses has not said anything about the song title “Kneel Down” …. no qualms, that’s where and why the Bridge sits, telling us to kneel down and pray when the going gets tough.
One thing is I will say this song is lacking is a clear theme, Mike Abdul, David, Karnji and A’dam all talked about different things in their verses and refrains and yet none of it is connected to the title of the song left for the bridge and our Chinese speaking voice on the intro, like I said earlier it apparently shows that they really want to have fun and give us a gospel music we all could dance to. This song is completely different from Korede, the first song off Mike Abdul’s forthcoming album and it makes us expect a lot of good music from the sophomore album of Mr. Mike Abdul
Lastly, I want to let everybody know that I’m not passing judgement on this song, but this is only “My Opinion”
–          Olubunmi Ojo 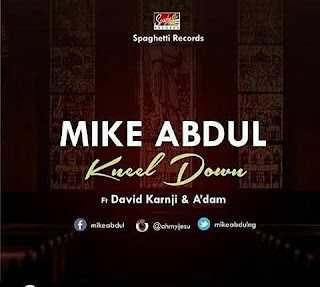