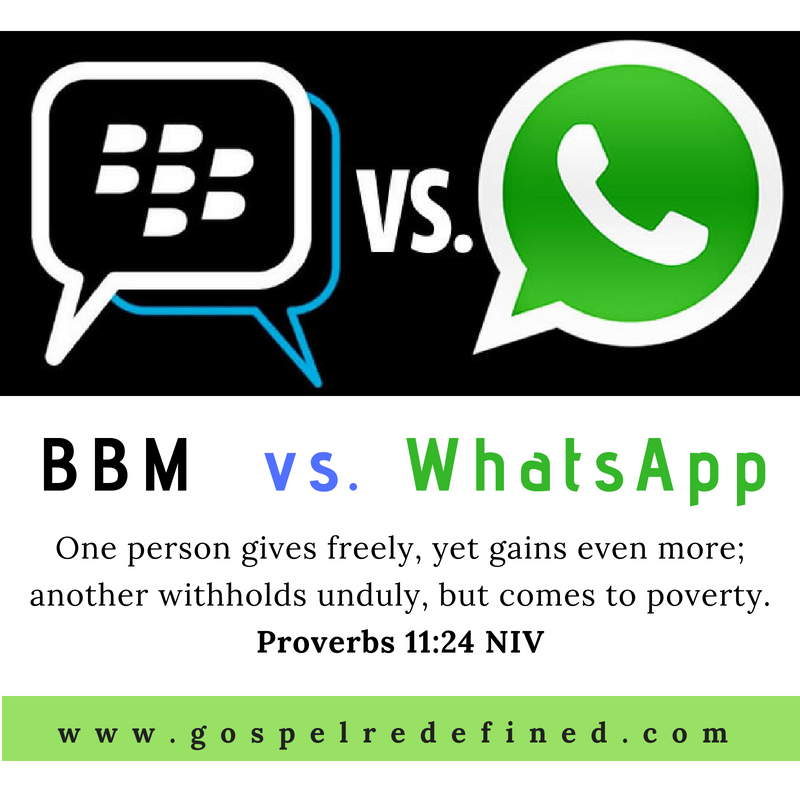 One person gives freely, yet gains even more; another withholds unduly but comes to poverty. – Proverbs 11:24

I am a BlackBerry fan, though I used to be an addict before iOS got my attention. However, I am still using a BlackBerry phone and I’m intending changing to another BlackBerry device. Don’t judge me too quickly, everyone has something he/she is glued to.
Do you remember those BlackBerry days, when you whisper your BlackBerry PIN and it’s like your most secretive thing. Chai! If you didn’t have BlackBerry then, my guy… forget swag or Class, you don’t belong to any.
My salary was 5k but my subscription was 3k, stupid right? Wait until you see the connections ‘staying connected’ granted me. Meanwhile, my subscription was 3k because I was a late comer. People have suffered 5k or more because BB was trending. Just like how Instagram and SnapChat are the reasons why a ‘Slay Mama’ is using iPhone, BBM was the reason most people were using the BlackBerry phones.
Not so long, Whatsapp came in, it looks like the poor people’s version at first, but then it started gaining waves when it resulted to be the only means esteemed BlackBerry owners can reach their colleagues, business partners, friends and family members who don’t have a BlackBerry like them.
Fast forward to today, I swiped from my Whatsapp chat to the Whatsapp status, and I told myself… “this could have been BlackBerry Messenger. Abi what is Whatsapp offering that BlackBerry Messenger can’t offer.”
Then I remembered that Whatsapp was offering for free what BlackBerry was holding more than needful.

“There is that scattereth, and yet increaseth; and there is that withholdeth more than is meet, but it tendeth to poverty.” Proverbs 11:24 KJV

Being the same company producing and licensing both hardware and software respectively created a loophole in their marketing strategy. So BlackBerry was given us what they want instead of what we desire and crave for. Who does that??? I bet a lot of people dropped BlackBerry because of the limitation the BlackBerry World placed on the availability and functionality of apps.
Read Also: The Bible and SEO (Search Engine Optimization)
Whatsapp started by offering people to reach one another simply by the use of their phone numbers. It is just like an advanced SMS and MMS. When last did you send MMS with your phone? Some of us don’t even know what MMS is, it means Multimedia Message Service.
This innovation made Whatsapp available on so many phones, even the Nokia Symbian phones and Asha Ranges, thereby creating a really wide reach for everyone.
Whatsapp grew and they started reducing their support on several phones including the almighty BlackBerry, on the other hand, BlackBerry was extending their reach to other phones and software platforms like iOS and Android, and by now… your BlackBerry PIN is as private as the receipt number on a Bank Teller, it’s personal to you but who cares???
Today, Whatsapp is not doing so much than what BBM can do, but the freedom they gave to people gave them the increased number of users while the preferences of the consumer drove their market strategy, and trust me they had insight into the future.
That’s why there’s now Whatsapp Status, Whatsapp Business and even people know that soon enough ads will be placed on Whatsapp statuses. That’s how clear their goals are!
The bottom line of this is that when you make an initiative easily accessible to people, it gives room for people to review, contribute, criticize, appraise and even condemn. You can learn and adjust from negative comments and be encouraged to do more with positive comments.

“Give freely and become more wealthy; be stingy and lose everything.” Proverbs 11:24 NLT

This is my own opinion, what do you think contributed to the rise and fall of these platforms, please share your thoughts in the comment session.