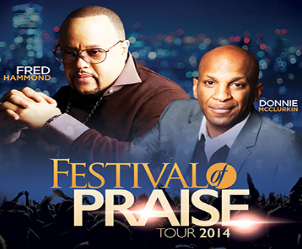 The 2014 Festival of Praise Tour with Donnie McClurkin and Fred Hammond kicks-off at the Verizon Theatre in Dallas, TX on September 18th during Gospel Music Heritage Month. Donnie and Fred will perform a series of duets as well as some of their classic hits.

This is Fred’s first tour since his knee surgery earlier this year and the successful 2013 United Tenors Tour and CD project he produced with Dave Hollister, Eric Roberson, and Brian Courtney Wilson.
“The Festival of Praise Tour was designed as a platform to uplift, motivate and encourage people,” says tour co-creator Ray Hammond, founder and CEO of Face To Face, Inc. of Dallas, TX.

“With all the negative things going on in the world today, we wanted to create an environment to positively impact as many lives as possible. Inspirational music has a unique way of doing that, especially when it’s presented by Fred and Donnie.” he added.

With a new tour and single, “I Will Trust,” Fred is looking forward to embracing and reconnecting with his fans. “The Festival of Praise 2014 Tour is going to be an awesome, anointed, praise and worship experience,” says Fred.

“Donnie has been my friend and brother for years and although we have worked together in the past, this is really the first time we have collaborated on an endeavour of this magnitude. The synergy and creativity in the presentation of this tour will be like none other. I sincerely hope that this tour inspires people everywhere and that we deposit something into their lives that will continue to be a blessing over and over again.”

“I can’t begin to express how excited I am to be teaming up with my long-time friend and brother, Fred Hammond, for the Festival of Praise Tour,” says Donnie.

“We’re planning a great evening of worship that we know will minister to people across the country and spread the message of God’s love.”

For additional information on the Festival of Praise Tour please visit www.festivalofpraisetour.com.