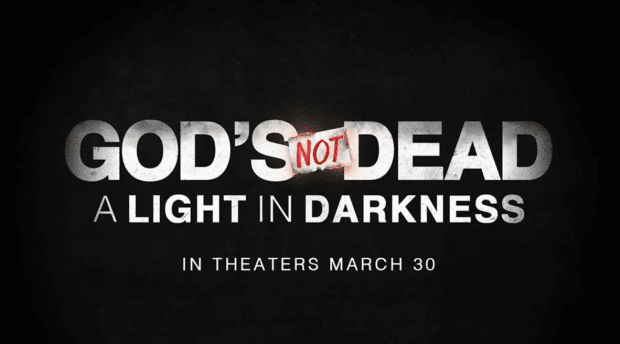 PURE FLIX, the leading independent faith and family film studio, announces the completion of principal photography for GOD’S NOT DEAD: A LIGHT IN DARKNESS,scheduled to release in theaters next Easter on March 30, 2018.

Filmed on location in Little Rock, Arkansas, GOD’S NOT DEAD: A LIGHT IN DARKNESS stars David A.R. White (GOD’S NOT DEAD), Emmy Award®and Golden Globe® nominee John Corbett (MY BIG FAT GREEK WEDDING), Shane Harper(GOD’S NOT DEAD), Ted McGinley (Married with Children), Jennifer Taylor (Two and a Half Men), and Academy Award® winner Tatum O’Neal (PAPER MOON).
Additional cast includes Emmy Award® winner Gregory Alan Williams, Mike C. Manning, Samantha Boscarino, rap artist Shwayze, Jennifer Cipolla, and music legend Dr. Cissy Houston. Reprising their rolesfrom GOD’S NOT DEAD are actors Shane Harper (“Josh”) and Benjamin Onyango (“Reverend Jude”).
GOD’S NOT DEAD: A LIGHT IN DARKNESS is an inspirational drama that centers on Pastor Dave (David A.R. White) and the unimaginable tragedy he endures when his church, located on the grounds of the local university, is burned down.
But his dreams of rebuilding the church face an unexpected setback when university officials reject his plans to rebuild,determining that the church is no longer relevant in today’s society.
Trusting in the motto that he has lived by that “God is good all the time,” Pastor Dave enlists the legal help of his estranged brother Pearce (John Corbett), who is an attorney but also an atheist.
As they partner together for a united cause, the brothers come to understand that not every victory requires defeating the opposition, and there is a greater win when you heal and rebuild with compassion and respect for others. Watch Trailer below.

“Audiences have continued to show support and interest in the GOD’S NOT DEAD films and their relatable characters who endure similar challenges in their personal faith and lives,” says Michael Scott, PureFlix founding partner. “Our hope is that these films offer entertainment and encouragement, with a starting point for sharing faith in a respectable and compassionate manner.”
GOD’S NOT DEAD: A LIGHT IN DARKNESS is the latest addition in the film franchise, which started with GOD’S NOT DEAD, the highest-grossing independent faith film of 2014, taking in more than $60 million at the box office.
GOD’S NOT DEAD: A LIGHT IN DARKNESS is Directed by Michael Mason and Produced by David A.R. White, Michael Scott, BrittanyYost, Elizabeth Travis, and Alysoun Wolfe, and Executive Produced by Troy Duhon and Robert Katz.
Moviegoers can follow the film on the official web site at www.GodsNotDead.com, on Facebook at www.facebook.com/GodsNotDeadTheMovie, or on Twitter @GodsNotDeadFilm

About Pure Flix
Founded in 2005, and led by partners Michael Scott, David A.R. White, Elizabeth Travis and Alysoun Wolfe, Pure Flix is the leading independent faith and family studio in the world. Its recent releases include: THE CASE FOR CHRIST, GOD’S NOT DEAD 2, GOD’S NOT DEAD, DO YOU BELIEVE?, WOODLAWN, A QUESTION OF FAITH, and SAME KIND OF DIFFERENT AS ME. With offices in Los Angeles and Scottsdale, Pure Flix has produced, acquired, marketed and distributed over 100 faith and family-friendly films. Aligned with their vision to influence the global culture for Christ through media, Pure Flix is the industry leader in creating high-quality inspirational feature film content. The studio’s official website is Pureflixstudio.com. The company also features a leading streaming video on demand service, with thousands of movies, originals, TV shows and more emphasizing faith, family and fun. For more information, go to Pureflix.com.