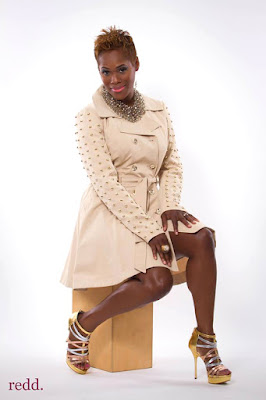 Fred “Unlce Freddie” Jerkins and Dark Child Gospel Records are pleased to announce the signing of its new artist, DAMITA. The company is excited at what is in store for this gifted artist. DAMITA grew up in the epicenter of music – Detroit, Michigan – where both mainstream and gospel music flourished.

Many know her from her Stellar Award winning work and lead vocals with the Voices of Unity. DAMITA is a force to be reckoned with and highly respected in the gospel community.
Her latest & highly anticipated CD, which is her third release is appropriately entitled “Anticipation”. Her fresh sound shines through everyday language, contemporary production and amazing vocals.
Damita is best known, not for her vast sound that explore both contemporary, urban, soul & rock but her roots stem deeply in worship. As an ordained minister, Damita Chandler burst onto the scene in 2000 as a solo artist, with her self-titled debut release on Atlantic Records. This project would land her multiple Stellar Award and Dove Award nominations. Her second album, No Looking Back, was released in 2008 on Tyscot Records. No Looking Back exhibits great range with the Praise & Worship songs “I Will Trust” and “Great God”. Damita’s subtleness confirms her strength and versatility as a singer.
DAMITA is managed by The Rob Hatcher Agency, and plans to release her long awaited single Spring of 2017.