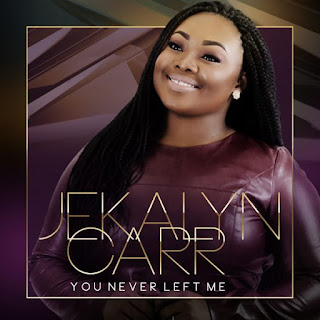 Jekalyn Carr is set to drop new music.
With her debut movie role filmed and “in the can,” Carr has returned to her musical foundation, as she preps the release of her newest single, entitled “You Never Left Me.” This exclusive, never-heard-before song was written by Carr’s father, Allen Carr, who is also responsible for writing the two biggest hits of her career, so far – 2016’s “You’re Bigger,” and 2013’s introduction of Jekalyn to the world, “Greater Is Coming.”

“You Never Left Me” features a superbly simplistic chorus that is sure to encourage and resonate in the hearts of all who hear it. It is a beautiful ballad of worship and affirmation and reminds us of God’s promise to never leave, nor forsake, His own, and that He shall be with us, even until the end of the Earth.