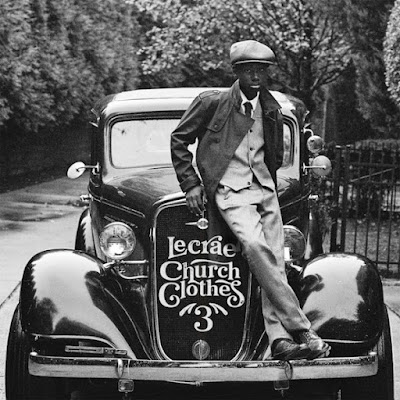 ATLANTA, Jan. 15, 2016 /PRNewswire/ — Grammy award winning hip-hop artist Lecrae releases Church Clothes 3, the highly-anticipated third installment from his celebrated mixtape series. Starting today, Church Clothes 3 is available via Reach Records for digital purchase and streaming across all DSPs including iTunes. Fans can also purchase a copy at DTLR stores, the lifestyle retailer exclusively carrying the physical release.
Church Clothes 3 is executive produced by S1 (Kanye West, Jay-Z) and features guest artists E-40, N’Dambi, Propaganda, John Givez, JGivens, Jackie Hill Perry and Lecrae’s label mate KB.
Lecrae is revealing the first visual for the project today on YouTube.com/ReachRecords, a long-form video with a storyline that loosely touches on the life of a teenage gang member who gets shot and his friend contemplates revenge. The video features four songs from Church Clothes 3 including “It Is What It Is”, “Gangland”, “Deja Vu” and “Misconceptions 3”.
Lecrae’s Church Clothes series has been met with critical praise and impressive chart success. Church Clothes 1 soared to double platinum status on the mixtape site DatPiff.com. Once released to iTunes, it debuted at No. 10 on the Billboard Christian Albums and Gospel Albums charts. Church Clothes 2 accumulated over 100,000 downloads on DatPiff.com in two weeks, and debuted at No. 21 on the Billboard 200 chart, No. 1 on the Top Christian and Gospel charts, and No. 3 on the Top Rap chart.
Church Clothes 3 Track Listing:
Lecrae, known for his music message that is often at odds with his hip-hop peers, speaks of monogamy, contentment, and faith. Lecrae’s message spreads beyond his music, however. He’s a sought out guest speaker for major conferences and many professional sports teams throughout the year. On May 3, Lecrae adds author to his list of endeavors in 2016 with the release of his memoir, Unashamed. Fans who pre-order the book are given the choice of exclusive campaign items including a song track by Lecrae, an Unashamed 116 t-shirt, and more.  Fans will claim their prize at UnashamedBook.com.
Today tickets also go on sale for the Higher Learning Tour.  Featuring special guest DJ Promote, and on selected dates, Propaganda, Swoope and Liz Vice, the tour kicks off February 9, 2016 stopping at more than 30 college campuses and in college towns across the country. For ticket information and a complete venue listing, please visit Lecrae.com/Tour.
About Lecrae:Lecrae is a Grammy award winning hip-hop artist whose 2014 album, Anomaly, debuted at #1 on the Billboard Top 200, Rap, Digital, Christian, Gospel, and Independent charts. His seven studio albums and mixtapes have sold more than 1.5 million copies. Lecrae has been nominated for five Grammy Awards, including a win in 2013 for Best Gospel Album and Best Contemporary Christian Music Performance/Song in 2015, as well as won seven Dove Awards, won a Billboard Music Award, won two Soul Train Music Awards and a BET Hip Hop Awards nomination. Lecrae resides in Atlanta, Georgia with his wife and three children.