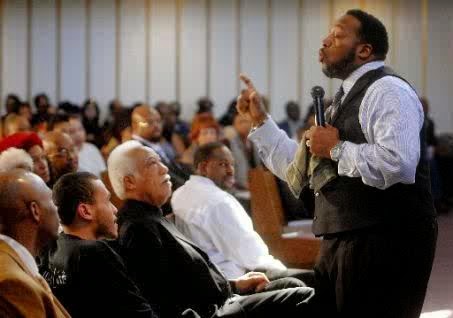 (EEW News) “Never would have made it” singer Marvin Sapp has a reason to smile after the
architectural structure of his church property survived a vicious tornado.
The 47-year-old pastor of Lighthouse Full Life Center Church is thanking God for sparing a building he owns  after the plaza right next door was ravaged by tornado winds reaching approximately 100-110 miles per hour.

According to the Associated Press a severe thunderstorm spawned a tornado that injured at least six people and caused significant damage to homes in western Michigan, as well as some homes in Iowa Sunday evening.
“Major storm in my city last night. Destroyed the plaza next to my building Praise Place,” Sapp wrote in a Monday, July 7 tweet.

Major storm in my city last night. Destroyed the plaza next to my building Praise Place #stillstanding #minorleaksintheroof #2GodBTheGlory