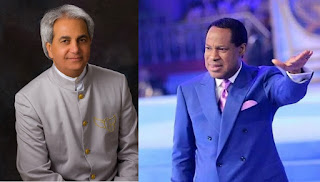 The globally renowned healing ministers and televangelists, Pastor Chris Oyakhilome D.Sc. D.D., President of the Believers’ LoveWorld Inc. a.k.a. Christ Embassy, and Pastor Benny Hinn of Benny Hinn Ministries, have announced a new synergy to bring to birth a brand new television channel in the United States, LoveWorld USA, beginning this summer 2017.
In 2003, Pastor Chris pioneered the first 24-hour Christian satellite network, broadcasting from Africa worldwide. This gave rise to stati­ons in Nigeria, South Africa and the United Kingdom, touching millions of people with the message of Christ’s salvation embedded in the far-reaching, audience-friendly television ministry of Pastor Chris.

“Pastor Chris Oyakhilome and Pastor Benny Hi­nn are delighted to launch this new network, dedicated to demonstrating the power of God on a daily basis in the United States and aro­und the world,” Pastor Deola Phillips expressed. “2017 is the Year of Flourishi­ng and May is the Mo­nth of Meditation; this transformational new TV channel has divine timing.”