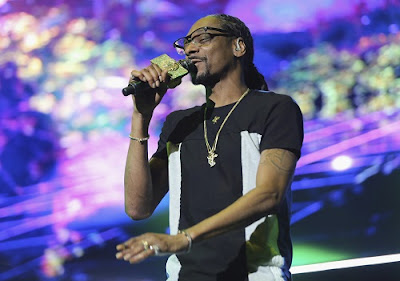 There you have it! American rapper, Snoop Dogg has revealed the name of his about to be released Gospel album.
The rapper who was raised as a Christian with a Baptist Church background announced last year that he wanted to release a Gospel album and has stayed true to his promise as he reveals the name of the album.
The 46 years old California born rapper titles the album  ‘Snoop Dogg Presents the Bible of Love.’ The upcoming album may not have an official release date yet but fans will be able to listen to it next month as they wait for it to be released sometime this year.
Also, fans will get a first taste of the album when he performs at the 19th annual Super Bowl Gospel Celebration this February. Snoop Dogg will be joined by Gospel artist Tye Tribbett, The Clark Sisters, Faith Evans, Rance Allen, Erica Campbell, Donnie McClurkin and the NFL Choir, who will be celebrating their 10-year anniversary.

READ ALSO: STEVIE WONDER IS WORKING ON A GOSPEL ALBUM

Snoop first teased plans for a Gospel album on Instagram last June, when he posted a screenshot of a conversation with his mother, eager to “spread the word” thanks to her encouragement.
“Praise the Lord,” she wrote to her son. “You are very welcome. The more you share with others the more you will reap more benefits. The more the Lord will enlarge your territory and bless you indeed. I am so grateful to the Lord for you and how God is moving you in the direction to bless His people through the word of God.” The same day, Snoop previewed a few tracks from the album.